Becoming physically connected can sometimes be hard. But when you are; how to know if you are mentally connected? Here is a post based on listening to teachers sharing unusual stories on what at this moment seem to be ongoing. It is about what is actually happening when you run Zoom, Teams, Meet etc. Conference-tools.

In my country Sweden there is a Facebook-group for teachers called “distant education”. It has grown a lot during Corona-times. Reflecting a bit on what is posted on chat-rooms like that can teach us a lot. Here is what I have found.

Yesterday, a teacher asked for “funny/odd/unexpected stories” on what has happened during digital meetings/lectures with students. The thread that evolved became extremely long, interesting, and funny, to read. Experiences one not necessarily would imagine actually has happened in real life was shared.

These comedians have already made something fun out of stories like that. Observe in particular what happen to the virtual background after three and a half minutes.

However, it is not only fun but also seriously interesting to hear these kinds of stories. They give us insight into a student’s real life. It is well known from marketing how easy it is to say, but how difficult it is to achieve: “if you want to be successful, you have to understand your customer”.

I´m also fairly convinced that similar events is happening in industry at this moment, if not before – Skype and other tools have been around for quite some time now.

Imagine the following. A corporate digital meeting with hundreds of people. The boss is presenting. Suddenly someone, but with no face shown, forget to mute their voice while sharing openly what he thinks is actually happening. He talks to his wife that happen to be in the same room. “Our boss is just lying, all the numbers he shows us at this moment are just pure bull…”

Has this happened? Well, you tell me.

A new generation of people also tend to give us an interesting insight into how it will look in industry some years ahead from today. So, what they in particular do when they are at digital meetings at this moment, probably tell us something about future.

An obvious thing to reflect on is this: while all of us at this moment are working from back home, we also have a tendency of showing our homes towards each other. And most of us do not dress up for a digital meeting. Our private life now “intervenes” with our working life in a different way, compared to before. Could a decent amount of that remain, even after Corona?

Will there be fewer business suits sold the upcoming years? Will our offices have to become more personal the upcoming years in order to make us accept even going to office? Will the division between work and private life be even blurrier than it already is?

A particular story in this Facebook-group captured my mind. It was a student that was frying an egg for breakfast, at the same time as participating in a digital meeting. After a while, other students that had joined tried to convince him to smash an egg in his own forehead before putting it in the frying pan. Finally, he also did.

Egg-roulette is actually a game. Even Tom Cruise seem to enjoy it. 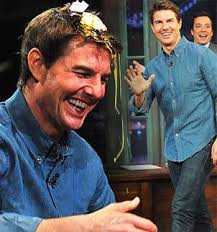 Of course, this story could have been about bullying. Social phenomenon we find in IRL can also be found in the digital space.

But, when I read the way the story was presented by the teacher, I did not get that impression. I got the opposite impression. The teacher added a smiley while telling it.

It was also a story told in a stream of other funny stories shared. And the chat related to it did definitely not indicate bullying. Instead it indicated a student with a desire for pranks.

Another story the teacher shared was about the student that joined a digital meeting as late as 13.30, arriving one hour late, and apologizing for having overslept. Also that story was shared with a smiley besides.

I believe this teacher had a good mental connection to her students.

One should not forget: People even being willing to share their personal life with someone else could be a compliment. People doing things like this can be an indication of an open and nice mental connection previously built up.

Well, of course this story could also be a sign of a student not caring at all. Not caring if a teacher is seeing something a teacher normally perhaps would/should not see. But still, when I read the story, I did not get that impression. Instead I got the feeling that the teacher was involved here somehow, and; in a nice, non-bullying, way.

Sometimes your feelings can outperform an advanced digital tool. They can track things not even Google Analytics can help out with.